Tyne Theatre & Opera House is a Grade I listed building with key features of outstanding national importance, such as a lavish auditorium and historically significant wooden stage machinery.

One of only about twenty-three Grade I listed theatres in Great Britain, the theatre is also one of only ten that date to the Victorian period. As one of the few theatres left in the world boasting wooden modular stage machinery, the theatre is an outstanding example of technological, artistic and creative innovation. The North part of the building is located within the boundary of the Hadrian’s Wall World Heritage Site and the theatre façade looks onto the city’s medieval Town Wall.

The Theatre is rated in the top 4% of listed buildings by English Heritage and is afforded a three-star rating (the highest) by the Theatres Trust: “a very fine theatre of the highest theatrical and architectural quality”. The significance of its architectural and theatrical heritage is also recognised by The Association of Historic Theatres in Europe, and the International Organisation of Scenographers, Theatre Technicians and Architects (OISTAT).

The Tyne Theatre & Opera House stage machinery includes four bridges, a demon and a fairy trap, object traps, and many other features. It was originally built in 1867 for Victorian stage spectaculars. Many of the stage operators were sailors who had the experience and skills of working with ropes and wooden structures. At any one time, over 30 people could have been working understage for a big transformation scene, with another 20 on stage and in the fly floor.

From live Derby-winning horses running on elaborate treadmills to colossal ship-sinking scenes, this was the most thrilling entertainment of the time. The sets were complex, and the work was dangerous. The Theatre’s “resident ghost” Robert “Bob” Crowther died after a cannon ball came loose from the ‘thunderun’ and landed on his head in 1887. The thunderun is a wooden gutter used to create the sound of thunder.

Take a peek behind the scenes and delve deeper into the Theatre’s rich history with one of our highly popular guided theatre tours. In a 1-hour tour of the building you’ll explore all areas including the understage, backstage and many other secret areas never seen on a normal visit.

Your tour guide will reveal the Theatre’s fascinating history, highlighting tales of its stars, its shows and even its ghosts! Find out more and book your place here: Tyne Theatre Tours.

The theatre is converted into a cinema The Stoll Picture Theatre opens on 2nd June 1919.

The New Tyne Theatre The building is converted back into a theatre by a group of volunteers and the Tyne Theatre Trust is formed.

Grade I listing The theatre is awarded Grade I-listed status in August 1985.

Christmas fire and refurbishment A fire destroys the flytower and damages the stage machinery on Christmas Day 1985. The theatre reopens in November 1986.

A new lease of life The theatre becomes independent, the Preservation Trust sets up a new Operating Company.

You can explore the full history below, from its birth as a theatre for the working classes, to the first talkie cinema in Newcastle, and all the way to the new lease of life as an independent venue.

The Tyne Theatre & Opera House opened in 1867 and was designed by William B Parnell for Joseph Cowen Jr. (1829-1900), a radical free-thinker, industrialist and politician. Money for the construction and possibly materials for the theatre came from the Cowen family business, the Blaydon Brickworks, four miles west of Newcastle.

Cowen, Thomas Forster (solicitor) and George Stanley (an actor-manager that ran the Tyne Concert Hall on Neville Street) wanted to build a theatre for the working classes in Newcastle that would satisfy public taste for spectacle. When the city magistrates denied Stanley a license to stage drama, Cowen was incensed, went into partnership with Stanley and financed the building of the Tyne Theatre & Opera House.

Joseph Cowen Junior was born at Blaydon Burn House, Blaydon. After private education in Burnopfield, he attended Edinburgh University, where he became interested in European revolutionary political movements. On returning from Edinburgh, Joseph Junior took a very active role in the family business and workers’ conditions.

Short in stature and uncouth in appearance, Cowen spoke with a distinctive Tyneside burr. When he entered Parliament in 1874, after the death of his father, his manner initially shocked members of the House of Commons. Eventually, his genuine eloquence established him as one of the best-known politicians in the country. He became known as the ‘Blaydon Brick’.

Cowen, a formidable political force in the North East, represented Newcastle upon Tyne as its Liberal MP from 1874–1886. On Tyneside particularly, Cowen helped to politicise the miners and to bring reformers from the middle and working classes together.

Read more about the Cowen family in the Newcastle University blog. 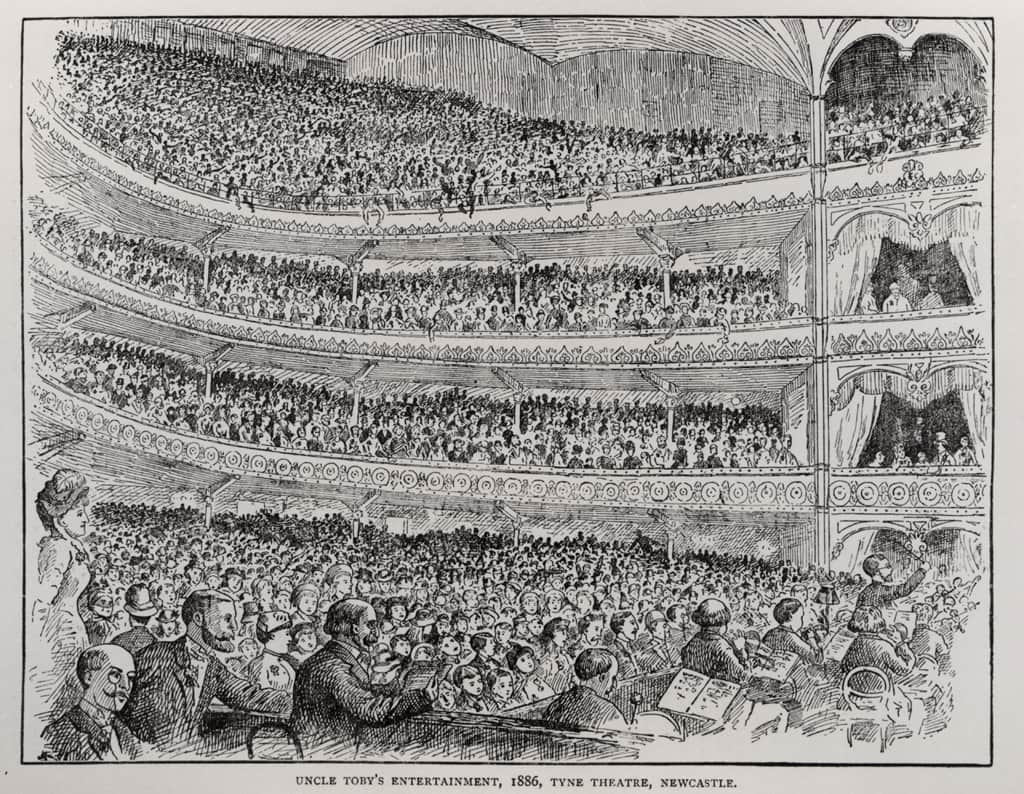 The theatre opened on 23rd September 1867 with Dion Boucicault’s Arrah-Na-Pogue: a melodramatic tale set during the Irish rebellion of 1798. The play’s theme – the struggle for Irish independence – is aligned with Cowen’s support of Irish nationalists. It played to full houses.

Stanley managed the theatre with a stock company* until 1881. During this period, and in the decades to come, the theatre became a venue for staging bold, socially-motivated dramas, as well as functioning as a forum for controversial debates. Richard William Younge managed the theatre in the 1880s and provided free shows for poor children and members of the bird conservation society, the Dicky Bird Society.

*A Stock Company was a troupe of actors performing regularly in a particular theatre, presenting a different play nightly from its repertory of prepared productions. Stock companies were usually composed of players who specialized in dramatic types – stock characters – such as the tragedian, the heavy lead who played villains; the old woman; the juvenile lead or the low comedian.

By the 1880s improvements in railway communications made touring productions available and local shows struggled to compete with big stars from London. The second lessee of the Tyne Theatre & Opera House was Richard William Younge, who managed the theatre from 1881 to 1887.

When Younge died in June 1887, Augustus Henry Glossop Harris, well known for being the manager and lessee of the Theatre Royal in Drury Lane, took over the lease of the theatre. Harris has been referred to as the ‘Father of modern Pantomime’, and it was his legendary Drury Lane pantomimes that he brought to the Tyne Theatre. It was under his and the later collaborative management that the majority of the late 19th century alterations to the theatre were carried out. The buildings that currently house the Bistro Bar and the shops to the West of the theatre were added at this time creating a Grand Salon.

In 1894, Sir Augustus Harris went into collaboration with Frederick WP Wyndham and James Brown Howard under the company name The Tyne Theatre Co. Ltd. These partnerships with London theatres brought major stars and spectacularly staged productions to the theatre.

The changing market for theatre during the First World War and the growing popularity of the movies brought about the closure of the theatre in 1917.

The theatre was leased by Sir Oswald Stoll and converted for cinema use by 1919 (following on from some experimentation in 1916 by Howard & Wyndham). There were already six cinemas in Newcastle. The Stoll Picture Theatre opened on 2nd June 1919 with a screening of ‘Tarzan of the Apes’ and was later the first cinema in Newcastle to show ‘talkies’.

The conversion work, unlike that of many other theatres around the country, was minimal. The theatre machinery was left in situ and the key changes at this time included the construction of a projector box at Upper Circle level, a cinema screen over the stage and alterations to the entrances of the building. The conversion was carried out by the office of Frank Matcham & Co., prominent theatre architects in London.

The theatre thrived as a cinema through four decades but due to a rise in the popularity of television, the number of people going to the cinema declined during the 1960s. The Stoll cinema attempted to counter this by cornering a select market showing ‘X’ rated films, but this did not help maintain the cinema and it closed on 23rd March 1974.

The Stoll cinema remained closed for three years, during which time a ‘Save the Stoll’ campaign had been started by Mr Jack Dixon. A protection order was placed on the building in 1974 and was the first step for the Tyne Theatre Preservation Group. In 1976, the Stoll Theatre Corporation agreed to lease the theatre to the Tyne Theatre Trust for 28 years.

It was during the closure of the theatre and exploration of the building that the original 1867 stage machinery was discovered in situ and intact, along with the stage sets from the last show performed – all simply concealed behind the inserted cinema screen. The New Tyne Theatre and Opera House Company Limited was formed as an independent registered charity with the aim to restore and reopen the theatre for stage performances.

In 1980, the Company made an offer to purchase the theatre and the surrounding property from the Stoll Corporation and the offer was accepted. The Trust first acquired the lease of the adjacent public house and then proceeded to purchase the entire block comprising 5 shops, 2 public houses, a restaurant, offices and six flats. The investment was seen as an endowment fund for the ongoing running of the theatre.

Understage trap after fire
Grade 1 listing and the 1985 Fire

In August 1985, the Tyne Theatre & Opera House was upgraded to a Grade I listed building.

On 25th December 1985, there was a fire in the backstage area of the theatre, which destroyed the flytower. Following the fire, on the 14th January 1986, a strong wind caused the remaining standing wall of the flytower to fall through the stage, damaging the stage machinery and stage. Fortunately, work had been suspended on site that day due to the wind. Miraculously, the task of rebuilding began almost immediately under the direction of Mr Jack Dixon, who was responsible for organising the original restoration programme in 1977.

With the insurance money, the Company replaced the damaged structure and refurbished the auditorium to a higher standard than had previously been possible. Works included a new roof, further dressing rooms and rehearsal rooms. By November 1986, less than a year after the fire, the theatre was reopened and its stage machinery operational again, reusing as much as could be salvaged from the fire. This was only 11 months after the fire and work had been completed for a total cost of £1.5million.

Unfortunately, accumulating debts forced the New Tyne Theatre and Opera House Company into administration in 1995. The history of the theatre has been one of versatility and enterprise to keep the theatre in use.

In March 2008, Newcastle City Council was able to purchase the theatre from Adderstone Properties and later that year transfer the freehold ownership to the Tyne Theatre and Opera House Preservation Trust. At the time of purchase, SMG Europe, managers of the Newcastle Arena and part of a multi-national theatre and facilities management company still had over 11 years to run on their 15 year lease of the Tyne Theatre & Opera House.

SMG Europe stepped away from the theatre in December 2014. The Trust decided to take a leap of faith and set up a new Operating Company, and was able to transfer the core of the theatre management team over to a new Company and start running the theatre independently.